With uncompensated care growing alongside the prevalence of high-deductible plans, providers are looking for ways to collect on unpaid bills.

Piedmont Health is requiring patients who will responsible for their entire bill to pony up a quarter of the amount before receiving non-emergent services. Methodist Le Bonheur Healthcare is in the hot seat after reports that it was sending many of its own employees—largely low-wage workers—to court to collect on thousands of dollars of medical debt. Meanwhile others, like Dignity Health are looking to streamline payment processing.

Those moves are necessary given uncompensated care, a combination of bad debt and charity care, increased to $38.4 billion in 2017 from $36.1 billion in 2015, according to the American Hospital Association.

But in an era of greater efforts to build trust with consumers who are increasingly in control of their care, experts wonder if it’s the right move. 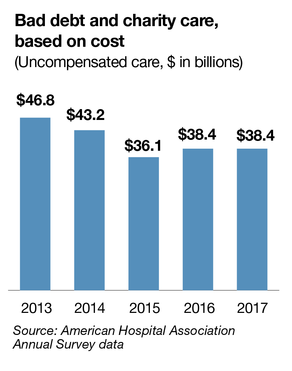 “With patient cost-sharing responsibility and bad debt on the rise, we as providers have had to try to do something different,” said Steve Scharmann, vice president of finance and revenue-cycle management at Dignity Health, which recently announced it was expanding a partnership with Ooda Health to settle patient bills in real time.

Collecting bills from patients has always been a pain point for providers, and it has created friction with payers, said Seth Cohen, co-founder and president of San Francisco-based healthcare billing-focused startup Ooda. “We want to get to a place where a patient can check out of a hospital like a hotel,” he said.

Executives from Ooda and Dignity say they’re creating an experience similar to a credit-card statement, where every provider encounter is listed on a single bill. Ooda then presents a consolidated invoice to the patient and handles reimbursement, claiming that it can better respond to patients with its access to payer and provider data and develop a long-term relationship.

Dignity and Ooda started the pilot at two Arizona hospitals and will bring it to two hospitals and a physician practice in Sacramento, Calif. Eventually they hope to expand the program across Dignity’s network. Dignity merged with Catholic Health Initiatives in February to form CommonSpirit Health.

“We have tried for over a decade to get a single bill and make it a one-stop shop. Now, a patient can make a single phone call and talk to someone” with access to the health plan and providers, Scharmann said.

That kind of transparency will be important to Atlanta-based Piedmont which last month began requiring uninsured, self-pay patients and those with high-deductible commercial policies to pay 25% of their bill before they can receive services.

“As much as people in healthcare want transparency, they get uncomfortable when you start talking about requirements for things, because requirements mean that a patient may hear ‘no’ to their healthcare,” said Andrea Mejia, Piedmont’s executive director of patient financial care and revenue cycle, “so that gets controversial.”

The new policy is the latest phase in what has been five years of improved patient education around out-of-pocket costs, including sending patients price estimates—even if patients didn’t ask for them—prior to almost all services.

“To move to point-of-service collections is a big shift,” said Joseph Fifer, CEO of the Healthcare Financial Management Association. “To do it even beforehand, that’s even a bigger movement, given where we’re starting from.”

Like many of its peers, 11-hospital Piedmont shoulders a heavy bad-debt load.

The health system’s $250.7 million bad-debt expense in fiscal 2018 was about 8% of its $3 billion in revenue that year—up from 6.5% of revenue the prior year and much higher than the 2% national average the American Hospital Directory calculated in 2017.

Not-for-profit hospitals’ bad debt is projected to increase at least 8% this year as the high-deductible health plan trend continues, according to Moody’s Investors Service.

Mejia said the policy’s potential to dissuade patients from receiving necessary care for serious conditions is “a very legitimate concern.”

The policy raises red flags, said Berneta Haynes, senior director of policy and access with the consumer advocacy group Georgia Watch. She said she fears it could hamper access to care and take away patients’ ability to negotiate. “It does have the potential to become a real impediment for folks seeking healthcare,” she said.

“That’s been the biggest lesson learned so far and pushback we’ve gotten,” he said.

There’s currently no ceiling amount on what patients could be forced to pay before receiving services, but Unell said the system would probably make an exception if 25% ended up being $2,500, for example. Piedmont discounts its billed charges by 70% for self-pay patients.

For policies like Piedmont’s to be successful, they need to have very good relationships with their referring physicians, Wiik said. Friction tends to occur when physicians argue that their patients aren’t getting medically necessary services, he said.

Wiik argued that if patients were truly unable to pay the bill, the hospital’s financial assistance policy or Medicaid eligibility would kick in.

In Memphis, Tenn., Methodist Le Bonheur CEO Michael Ugwueke had to respond to criticism after a ProPublica investigation found that from 2014 to 2018, the safety-net hospital had filed more than 8,300 lawsuits against patients, whose wages were garnished as a result.

“Our team will work with every patient—insured and uninsured—struggling with medical expenses. Uninsured patients receive an automatic 70% discount off the cost of their care and we will work with any patient willing to work with us to create a payment plan that fits their budgets,” Ugwueke wrote in an op-ed printed in the Commercial Appeal newspaper.

The future of debt collection

The cost of billing and insurance-related activities will amount to $496 billion in 2019, according to an estimate from the left-leaning think tank Center for American Progress. A 2018 study by Harvard and Duke academics published in JAMA found that up to 25% of emergency department visit revenue at an academic medical center went toward billing costs.

Inpatient service volumes continue to either stagnate or decline, which means hospitals may not be able to abate the effect of rising bad-debt levels. Thus, they are turning to specialists to try to lower the time and cost to collect. Some health systems have outsourced thousands of revenue-cycle employees to third parties while others employ one-off technology solutions. But layering different types of software can complicate matters.

Whatever strategy is implemented, something has to change, experts said.

“The core infrastructure of how claims get paid and collected seems to be relatively unchanged for decades,” Ooda’s Cohen said.

Dignity reported provision of bad debt of $587.3 million in 2018, up from $547.8 million in 2017. That number grew to $979 million on a pro forma basis for the first nine months of its fiscal 2019 as the system added Catholic Health Initiatives to its balance sheet.

Executives said they don’t yet have data on the exact reduction of bad debt or time and cost to collect since the Dignity pilot was launched in September, but the feedback they have gotten from customers who are surprised to receive one bill has resonated, they said.

“The No. 1 goal in the pilot is not increasing the yield; it is prioritizing the member experience,” Cohen said, adding that Ooda offers discounts for creating payment plans and 0% financing.

Providers and payers have advocated for resolving what has typically been an adversarial relationship. But few have reached a collaborative middle ground.

“There is a groundswell happening,” Scharmann said. “I would say it has been lip service for many years, and to a certain degree it still is. But I see more payers and providers coming to the table to try to do this better.”

By Tara Bannow and Alex Kacik

← Older Post
← How Marketers Create a Strong Persona
Newer Post →
This Overlooked Hiring Risk Cost an Entrepreneur $100,000 in 5 Months. Here's How You Can Avoid It →