Moved During COVID? A Third of Bosses Say They’ll Cut Your Pay 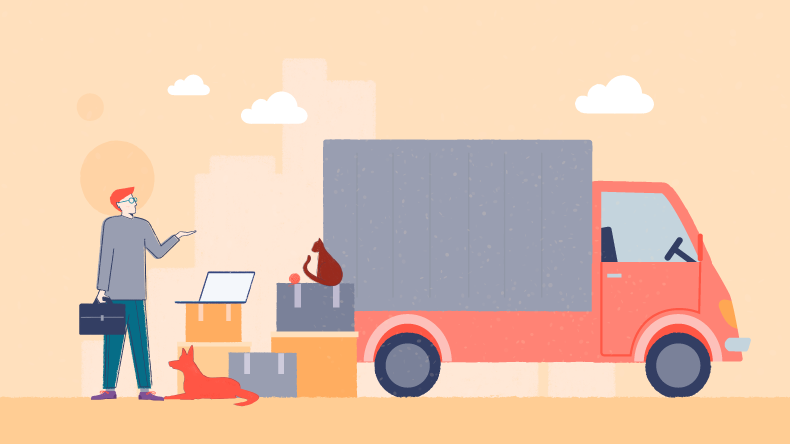 Any savings from relocating to a cheaper place might disappear.

As many as a third of remote workers who move to a cheaper place to live during the pandemic could end up getting a pay cut that offsets any savings, Willis Towers Watson found in a survey released recently.

About a quarter of employers said they will reduce pay to reflect lower living costs for relocated workers, and another 9% said they will cut compensation for workers who aren’t in critical roles, according to the survey of executives at 344 North American companies in September and October. The executives, who employ about 5 million workers in industries ranging from manufacturing to retail, also said that they expect more than half of their employees to work from home through at least the first quarter of 2021.

“They are doing it on the very logical premise that the cost of labor is different in these different locations,” said Catherine Hartmann, a managing director at the consulting firm and one of the researchers on the survey. 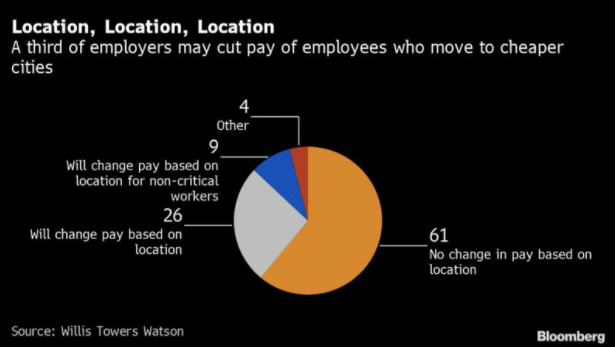 The pandemic is reconfiguring a large swath of the U.S. workforce, with about 35% of employees working from home because of Covid-19, according to the U.S. Census data gathered from late October through Nov. 9. Many white-collar workers who had returned to the office are being forced back home by a recent record-setting spike in infections, which have killed almost 250,000 Americans and sickened more than 11 million. Still, a majority of U.S. workers — those in sales, services and essential jobs — are unable to work from home.

Facebook Inc. Chief Executive Officer Mark Zuckerberg, who has said many workers will never come back to the office, told his employees in May that while they are free to move away from costly Silicon Valley to more affordable communities, they should anticipate their future pay to reflect the lower living costs. Other tech firms have since made similar statements, including Slack Technologies Inc. and Box Inc. Tech made up only 13% of the companies in the Willis Towers Watson survey, suggesting many other companies are also looking at pay cuts.

Employers are also studying how to account for the costs of remote work, such as adding more benefits for emergency child care or reimbursements for using home technology. Only 28% of employers said they had no plans to change their compensation regime to adapt to remote work. The survey also found that the executives now predict about a third of their employees to be working from home full-time in three years, up from 5% three years ago.

Companies that do reduce pay based on geographic savings will have to develop a clear process for determining whether an employee has moved to a lower-cost area, whether pay cuts will make the company less competitive and whether there might be legal implications in area such as pay parity, Hartmann said. Many companies will be watching to see whether reducing pay based on local living costs is actually widely adopted, she said.

As many as 23 million Americans, or 11% of households, plan to relocate as working from home becomes more popular, according to a survey released Oct. 29 from online freelance company Upwork Inc., which polled 20,000 people.

A study of the 30 largest U.S. metro areas during the pandemic from March to September showed that people leaving big cities such as San Francisco, New York or Los Angeles were moving to less-expensive metro areas in the same region, such as San Diego or Philadelphia, according to Orbital Insight, a California-based company that tracks movement of goods and people. Northerners also tended to move to warmer cities in the South, the data showed.

By Jeff Green and Alexandre Tanzi