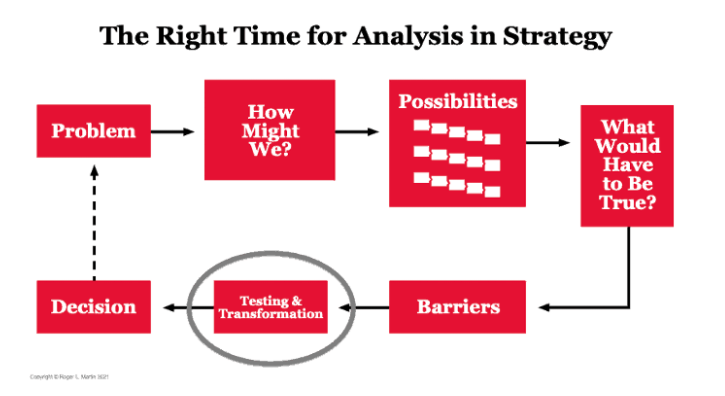 SWOT is a Dreadful Way to Start a Strategy Process.

I am tired of reading SWOT analyses. My annoyance is not because of the amount of time I waste reading them — which is a lot. It is about the time some poor souls wasted putting them together. That is why I have decided to write my 28th Playing to Win Practitioner Insights post on It’s Time to Toss SWOT Analysis into the Ashbin of Strategy History.

A Bit of History

Arguably the most venerable and frequently deployed analytical tool in all of strategy is the Strengths, Weaknesses, Opportunities, and Threats (aka SWOT) Analysis, which came into existence at the same time the concept of business strategy was birthed. Interestingly, despite its prominence, there is dispute over its creation. One school of thought holds that SWOT was created in the mid-1950s by some combination of C. Roland Christensen, Kenneth Andrews, and George Smith Jr., all Harvard Business School (HBS) professors who taught the longstanding capstone Business Policy course. The other school of thought — and one that is picked up and repeated online most often — is that SWOT was created in the early 1960s by a Stanford Research International (SRI) consultant named Albert Humphrey.

It is amazing to me that not one article on the disputed origin of SWOT takes note of the coincidence (or not) that Humphrey was an MBA student at HBS in (guess what) the mid-1950s and would have taken the required Business Policy course, probably from one of Christensen, Andrews, or Smith. My suspicion is that he either learned it at HBS and commercialized it at SRI or learned about the fundamentals of the tool at HBS and enhanced it in his consulting practice.

In any event, SWOT came along in the seminal period of 1955 to 1965 when scholars and practitioners were attempting to define this new thing called business strategy and to engage in the untried practice of strategic planning. Unsurprisingly strategy quickly became a planning exercise because formal business planning had been taught and practiced since the inception of business education at the beginning of the 20th century and was comfortingly familiar to managers. Now planning needed to become ‘strategic’ — but what on earth did that entail? It turned out that SWOT became the initial answer. To be strategic, one had to step back and ask these broad questions: What are our strengths, our weaknesses, opportunities for us, and threats to us?

Like any practice that builds an early mindshare lead, SWOT maintained and built on that lead so much so that half a century later, a strategic planning process is more likely than not to be kicked off with a SWOT analysis.

The Problem with SWOT

When I give a strategy talk, I often ask the audience: Who here has either performed or received a SWOT analysis? Virtually all members of every audience put up their hands because SWOT is such a prominent tool that everyone has both performed and reviewed numerous SWOT analyses. I then ask: Who can tell me a blinding insight that came out of any such SWOT analysis? I am still waiting for my first hand on that second question. Not one single audience member has raised his or her hand to tell me of a decisive insight from a SWOT analysis. That is pretty damning given the millions of person-hours per year that are spent on performing and reviewing SWOTs. Not one non-intuitive strength arose out of a SWOT. Not one fascinating weakness was unearthed. Not one terrific opportunity was brought to light. Not one damaging threat was anticipated.

It is not because SWOT analyses aren’t thoroughly done. They are typically monumental, running to hundreds of pages of charts, graphs, and tables. The problem is that the task itself is conceived in a way that makes it inherently undoable.

Consider the strengths analysis. To be able to analyze one’s strengths, one has to have a definition of what is contained in the category ‘strengths’ and a way of measuring whatever is included. But a strength is only a strength in the context of a particular WTP/HTW (Where-to-Play/How-to-Win) choice. If it turns out that your HTW specifies that you will win based on the broadest product line, then having a broad product line would properly show up as a strength in your SWOT. But if instead, it turns out that having the most reliable and consistent delivery is your HTW, then breadth of product line might actually be a weakness, and certainly isn’t a strength. At the start of a process to determine strategy, you just don’t know the WTP/HTW choice you will eventually make, which means you can’t determine anything particularly insightful about your strengths. That is why the strengths analysis in SWOT is so bland, generic, and undiscriminating.

The same thing applies to weaknesses. A weakness is only a weakness in the context of a particular WTP/HTW choice. And the same applies to opportunities and to threats. It is a threat if there is a new entrant in a given WTP, but only if you choose to play there. That is why there is blandness across SWOT analyses. You can’t be specific about strengths or weaknesses in advance of a WTP/HTW choice. It isn’t obvious what is or is not an opportunity or a threat at the outset of a strategy process. Hence by accidental design, SWOT analyses are a mile wide and an inch deep, generating lots of work and lots of pages, but producing little insight.

The superior approach is to perform an analysis only when you are clear on the specific purpose so that you can go a mile deep and an inch wide. That means you don’t do it up front as with the SWOT and you don’t attempt to make it excessively broad like the four-pronged SWOT. Wait for analysis. Be patient. Don’t jump in before you have thought about what you are doing.

Start by defining the strategy problem you are seeking to solve. That is, what is the gap between your aspirations and the outcomes you are seeking. Then specify the form of the solution by way of a ‘how might we’ question. That is, how might we eliminate the identified gap that we currently face. Then imagine possibilities of WTP/HTW choices that have the potential of answering the how might we question to eliminate the gap between aspirations and outcomes. Then for each possibility, ask what would have to be true (WWHTBT) for it to produce the desired outcome. Then identify which WWHTBT elements you feel are least likely to be true and therefore are the barriers to you choosing to go forward with that possibility.

Then and only then, when you have precise understanding of both the question you are seeking to answer and the standard of proof you require, design specific tests for the elements that are critical to your choice. Your patience will be rewarded with analyses that are far more precise and produce much more compelling results.

The SWOT issue is only one manifestation of a broader problem of the misuse of science in data analytics. With ever-greater computing power, analysts can crunch huge datasets, spreadsheets with endless rows and columns, to look for patterns and correlations. Because it involves numbers and analysis, it feels scientific. But it isn’t. It is just data mining — and if you torture data enough, it will give you something! It will give you correlations without underlying cause, trends without meaning, etc.

Analysis is only scientific if it starts with an explicit hypothesis. That doesn’t include implicit ones — “I think x, but I am going to keep that to myself until I see what the data say.” The hypothesis will guide the analysis with scientific precision: what data should be crunched, in what manner, and with what standard of proof.

Unfortunately, SWOT is classic data mining. It collects vast tracts of data with no hypothesis (other than these four vaguely named categories) and hopes something useful pops out, which my audience question reveals doesn’t happen. Or worse yet, the people performing the SWOT do have hypotheses, but they are kept secret. So, they impose their theories on the data collection and analysis but will tell you it is an objective analysis while they guide it to the desired conclusion.

SWOT was created in the early days of strategy when early practitioners were desperate for tools. But it has become a monstrous time-sink with little or no compensating value. It needs to be relegated to the ashbin of strategy history.

This one is pretty simple: never do a SWOT analysis. And never pay attention to a SWOT analysis you happen to receive. At best, it is a waste of time. At worst, it will distract you from creating and rigorously testing your strategic logic.

More generally, never do an analysis without first generating a hypothesis. Otherwise, you will engage in aimless data mining. Some people are fearful that holding a hypothesis before testing it will result in bias — for example by anchoring on the answer suggested by your hypothesis. It is a challenge. Anchoring is real. However, it is worse to have no hypothesis at all because you can’t advance your thinking rigorously without forming and testing hypotheses. My advice on this front is a slight modification of the admonition to have a strong opinion that is loosely held. I think that a strong opinion can cause others to take offense. I believe that you should always have a clear opinion that is loosely held. It means that you take the time to form an explicit hypothesis to guide your actions. That will enable you to continuously improve your understanding of the world around you, and that will make you a better strategy practitioner!