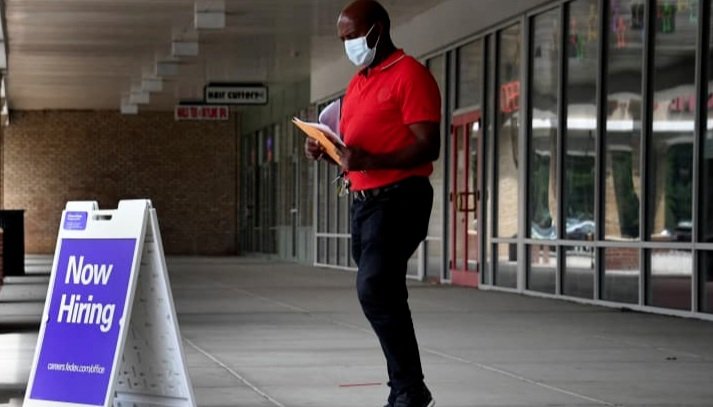 On the surface, conditions may seem ripe for a boom in the U.S. labor market.

There are still 5 million fewer jobs than before the pandemic but job openings are near record highs. And hourly pay has risen, in some sectors by more than 10% in a year.

Meanwhile, enhanced federal unemployment benefits ended on Labor Day (or sooner) and kids are largely back in the classroom. Both enhanced jobless pay and distance learning, it was thought, had been roadblocks keeping people from returning to work.

However, that boom hasn’t materialized in recent months — at least, not at the rate many expected. Job growth slowed in September after surging in the spring and early summer, and the labor force shrank. 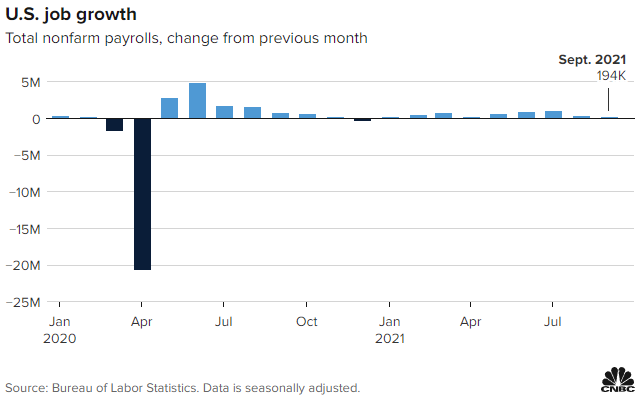 “If you had ever told me we’d have millions of workers still on the sidelines and have wages going up because people couldn’t find workers, you could knock me over with a feather,” said Diane Swonk, chief economist at accounting and advisory firm Grant Thornton.

Early evidence suggests enhanced jobless benefits played at most a small role in keeping people from work. So, why aren’t people rushing back to take jobs?

There are many reasons and complex nuances, according to economists. Here are some of the main drivers.

Health risks associated with the ongoing Covid pandemic have clearly played a role in recent months, according to economists.

Job growth slowed in August and September, when caseloads were spiking due to the delta variant. (There were 366,000 and 194,000 new payrolls added those months, respectively, compared to 1.1 million in July and 962,000 in June.)

A record 4.3 million people quit their jobs in August. Front-line workers in sectors like restaurants, bars and retail quit at the highest rates — lending credence to the idea that fear of contagion and hazards of in-person work are playing a role, Swonk said.

Job growth should re-accelerate as Covid cases abate, according to Zhao. (There were roughly 76,000 average new daily infections as of Oct. 18, less than half their recent Sept. 1 peak.)

Early retirements have also reduced the pool of available workers.

Older adults are at higher risk of severe illness and death from Covid. They may have opted to start drawing Social Security and live off their nest egg instead of taking a risk at work, economists said. Grandparents may have also offered to watch their grandkids and ease childcare duties for working parents.

“All those things would push especially hard on people in their 60s to come out of the labor force,” said Aaron Sojourner, a labor economist and associate professor at the University of Minnesota.

Compared to two years ago, there were 3.6 million more people out of the labor force in September who indicated they don’t want a job right now, Sojourner said, citing U.S. Bureau of Labor Statistics data. People age 55 and older account for 89% of the increase.

“I think we shouldn’t assume they’re never coming back,” Sojourner said. “But for now, they’re not back.”

Care responsibilities have made it tough for some workers — especially those who can’t work from home — to come off the sidelines.

For example, many schools reopened for in-person learning for the new academic year, helping ease childcare constraints for parents. But Covid outbreaks have led to sporadic quarantine periods that may stress parents’ ability to hold or commit to a steady job.

“That uncertainty will make it difficult for workers, especially in front-line service roles,” Zhao said.

Further, in September, there were 1.8 million more people not working due to caring for someone sick with Covid, relative to a year earlier, according to Sojourner, who analyzed data from the U.S. Census Bureau’s Household Pulse Survey.

Further, there were 336,000 more people who said they were mainly not working due to care for an elderly person, Sojourner said.

Households across the income scale have been able to amass higher savings relative to pre-pandemic levels.

Cash balances were up 50% for the typical household in July 2021 relative to two years earlier, according to the JPMorgan Chase Institute.

“People might feel with a little extra buffer on hand, that they have a little more time to wait,” said Fiona Greig, co-president of the institute. “They don’t have to find a job this moment.”

Families may have also spent less money with certain entertainment and other venues closed during the crisis.

But that extra cash may not last long, perhaps pushing workers who deplete savings back to work. Higher-income households have the most savings on a dollar basis (more than $4,000) relative to lower earners (who have $1,000 in their checking accounts), according to the institute.

There may be near-record job openings — but that doesn’t necessarily mean businesses are paying a wage workers will accept.

Wages have risen more than $1 an hour, or 4.5%, in the past year across all private-sector jobs, according to the Bureau of Labor Statistics. Some sectors are up more — leisure and hospitality pay is up 11%, to $18.95 an hour, for example. The Bureau attributes the upward pressure on earnings to a rising demand for labor.

But that higher pay may still not be enough to attract workers from the sidelines, Sojourner said. That’s more likely to be the case if a job has deteriorated in quality, he said — whether because of health risks, increased hours or other inconveniences like dealing with unruly customers who oppose mask requirements. There may also be a competing priority like the cost of child care.

Corporate profits and productivity are up more than average wages over the past two years, so many employers likely have room to further raise pay, Sojourner said.

“The big question is, why aren’t companies bidding up wages and working conditions fast enough to pull people off the sidelines?” Sojourner said.

It will take time

It will also take a while to work out some of the frictions that have built up in the labor market in the past year and a half, economists said.

Jobless workers have had ample time during the pandemic to reassess their working lives and what they want from a job. Some may opt to switch careers. The available jobs may also not be in a worker’s prior occupational field or in their geographical area.

There’s also a mismatch between worker and company expectations. For example, between one-fourth and one-third of corporate chief financial officers expect their organization to return to in-person work full-time, which is fundamentally inconsistent with the flexibility workers want, according to Tim Glowa, a principal at Grant Thornton, citing company surveys.

And much of the low-hanging fruit in the labor market has already been plucked, so to speak. Many workers who were temporarily laid off (furloughed) early in the downturn have been recalled to their old jobs or moved on to other work — leaving the tougher proposition of hiring the permanently unemployed or people who fell out of the labor force, Zhao said.

“Getting people back into jobs isn’t something you can do at the snap of a finger,” he added.