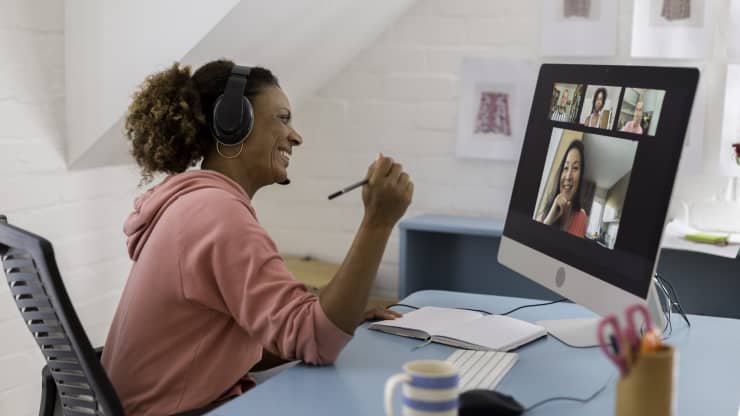 “Hey, can we get meetings both shorter and more engaging?”

It’s a question software CEO Jim Szafranski gets a lot from customers, which range from start-ups to Fortune 100 companies.

Szafranski runs Prezi, whose technology allows executives to add visuals and animations to video presentations and meetings. Increasingly, clients are asking for advice on reducing live meeting times to as little as 15 minutes, he said, speaking to CNBC via video call.

“What they’re looking to do is … increase the connectivity between employees, get better productivity out of those meetings, and try to reduce these burnout issues that are … [due to] the concept of Zoom fatigue.”

Szafranski has some tips for his clients, including holding portions of a meeting in advance, at a time to suit each participant, so when the live gathering happens it’s more efficient. One way to do this is to have the person leading the meeting record a short video to explain the point of it and the decisions that need to get made. This gets the host to focus, Szafranski said: “If you’re going to send something ahead of time about the meeting, you better have thought about it.”

Prezi’s clients are not alone: Around half of executives surveyed by consultant Korn Ferry in 2019 said that spending too much time in meetings distracts them from work.

Meanwhile, a Microsoft study of brain waves showed that half-hour, back-to-back meetings increased stress in participants — and the company reduced Outlook meeting length defaults as a result in 2021.

Sending advance information via video or collaborating via an online system like Google Docs is effective for “asynchronous” communication, according to Szafranski, when staff keep different hours depending on their time zone or how they want to structure the working day. Within Prezi, meeting attendees will add topics they want to discuss to a live document, and “knock off” the subjects they can deal with ahead of meetings, Szafranski said.

From Feb. 1, Prezi will also stop holding meetings on a Wednesday to allow its 300 employees in 13 countries to have uninterrupted “flow time,” he said, meaning people can “push hard” for two days, rebuild their energy and gather their thoughts midweek, and then continue to work more intensely for the remaining days.

Martin Smith is CEO of tech PR firm Sonus, a company that is also looking to run meetings more efficiently.

Smith decided to replace a regular all-staff catch-up with 15-minute meetings on a Monday for teams to confer on relevant clients. This meant employees avoided sitting through extraneous conversations and also helped Smith streamline his own schedule. “Going from meeting to meeting to meeting [previously] … there was actually very little time to sit down, write or think … [now] I’ve got these wide gaps on my calendar where I can actually focus,” he told CNBC via video call.

The business has picked up several new clients in the past few months and now uses integration software ClickUp to run projects and help its 15 U.S. and U.K-based staff communicate effectively. The new system, combined with the shorter meetings, has increased the “professionalism” of the business, Smith said. “To be able to present a more structured and thoughtful approach to [clients] helps make us ‘stickier,’” he added.

Software company Zapier has been fully remote since it was founded in 2011 and now has a workforce of around 500 people in 38 countries. Individual teams used to run short, daily meetings over Zoom — known in the tech industry as “standups” — where each person updated coworkers on what they’d done over the past day, what they planned to do during the next one and any issues they were having.

But, in a 2020 blog post, Zapier explained how its standups sometimes went “off the rails” and got into detailed engineering speak between two participants that might be irrelevant for the rest of the team.

So, the company scrapped that style of meeting and replaced it with text communication, managed by a bot using Geekbot software in messaging app Slack. The bot prompts team members to provide updates on work they’ve done and any issues, and only takes about a minute or so for staff to share their progress.

Asked whether relying on messaging apps means people have to deal with endless notifications, Brandon Sammut, the firm’s chief people officer, suggests organizing Slack channels by subject and encouraging people to use emojis for quick reactions. “When all else fails, if you find yourself in an endless Slack thread that doesn’t seem to be reaching a resolution, that’s a good sign it’s time to schedule a Zoom meeting,” he told CNBC via email.

Zapier also uses automation to run recurring meetings. “We have automations that create an agenda, send it to participants ahead of time to complete and review, and send people a Zoom link ahead of the meeting,” Sammut said. “Automation makes us more productive during our meetings, so we can focus on discussing ideas rather than inputting and reviewing updates.”

Chmielewski’s team uses a three-step process to make sure meetings are short and efficient. Organizers must first “define a clear purpose,” he said. Then, if a meeting is needed, they set an agenda and add questions on the topics they want to discuss. “We find that questions are more precise than statements. If the questions are broad and cannot be summarized in a short e-mail, the organizer has further proof that a meeting is in order,” Chmielewski said. “15-minute duration times are only a result, not the overarching aim,” he added.

The three-step process avoids the classic “could’ve been an email” response to some meetings, he added. “Conversely [we] never cause miscommunication by sending e-mails that should’ve been a meeting.”