Ideas are Fleeting – How to Consistently Get from Ideation to Delivery 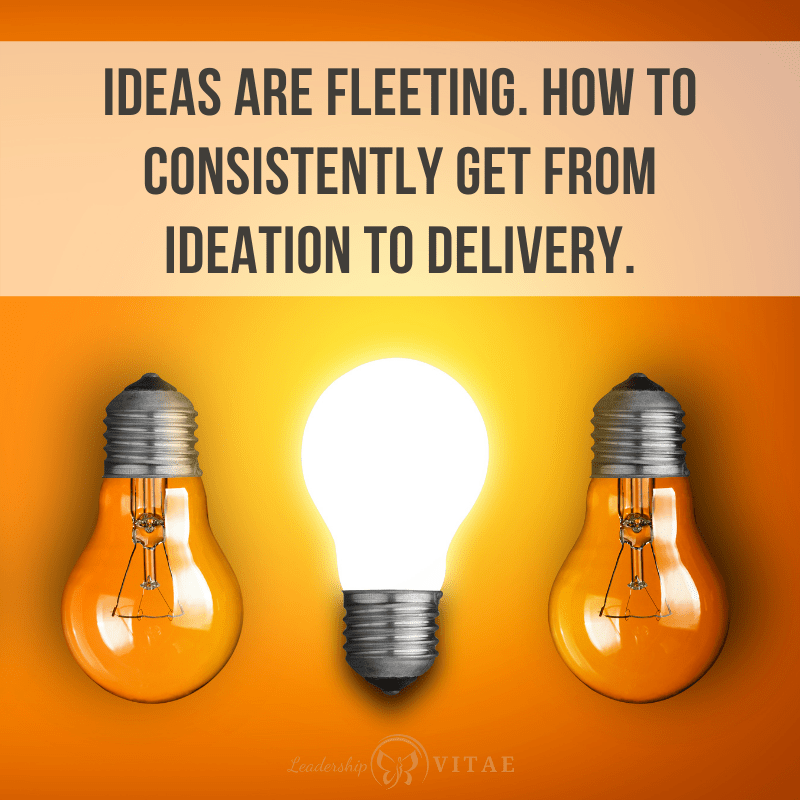 I have been feeling very prolific lately. I’m writing this during Thanksgiving break (November 2021) and am not yet sure when it will publish. Articles are written through May, with additional ones framed out through July.

When flow hits, the best thing is to ride it like a wave. For creatives, we are not always sure when we will tap into a fount of inspiration. We take it in when we can because at any moment, we know life can happen. By maximizing flow, we create space to reprioritize when disruption occurs.

Years ago, I was working with my executive coach when she observed how consistently I would have ideas and move them through to delivery. I never thought anything of it, until she pointed it out. I’m a project manager by trade and used to solving problems. Big ideas on how to get ahead of challenges or accelerate timelines were normal to me.

Instead, she helped me understand that for many people, not all ideas are captured and acted upon. That caused me to reflect over the years on what actions I take, and how I could increase the number of big ideas that come along. What framework I could share with others to do the same?

In 2020, I read Big Magic. One of the concepts that stood out most was that ideas and inspiration are looking for a home. If they all want a place to land, what would make them choose me, you, or that gal over there?

In a universe full of wonderous potential, we need a way to curate and selectively move ideas forward through a funnel. But first, how do we entice those notions our way? How do we create more prospects?

All ideas begin with fleeting notions. Imagine inspiration floating above our heads, just waiting to be caught. At any given moment, it could be a trickle or a flood of inspiration for the taking.

How do we increase that volume? By opening ourselves to experiences that route new notions our way. Becoming a magnet for them.

The funnel of ideas can be filled with prospects through our daily actions. If we do the same things the same way every day, it might be a trickle. Instead, we can take actions, even small ones, to increase the volume.

Maybe we take another way home. Stop and talk to a neighbor we haven’t chatted with before. Read a different genre of book.

I find myself creating fuel for ideas at work and home. For writing, it may be coaching conversations, podcasts, or a new book someone recommended. At work, it is often talking to people in other areas of the organization, learning new concepts, or reading articles about how data is used in other industries.

Once we’ve been inspired and a notion has started to vaguely appear, we need to become fully aware of it. Life is filled with distractions and disquiet. It can be difficult to move an idea forward if we can’t quite get our minds around it.

We have to quiet the mind. Pause and notice that a spark has formed. A connection has been made.

This doesn’t mean we have to practice mindfulness, at least not in the formal sense. Instead, we need to create non-busy space for ideas to be received. Maybe we go for a walk or take a breath.

Sometimes, in conversations, I’ll ask for a moment. If I think it’s relevant to the conversation, I’ll let those I’m speaking with know that I have a thought and would appreciate a chance to receive it. I’ll close my eyes and picture what’s trying to rise up in my consciousness.

Otherwise, I might redirect my consciousness for a moment to explore. To allow the thought to land. Mental space is critical to allow notions to fully form into tangible thoughts and ideas.

Once we have created space for a thought or idea, we have to catch it. Frequently, we aren’t in the space to do that.

In those meetings, for example, the idea could come and be gone in an instant. In the shower, getting ready to sleep, driving, or walking, when we’re finally quiet, the ideas might pop up and then disappear.

No matter when an idea hits, it’s important to capture it in the moment. With whatever we have available to us.  In the car, I might dictate a text. Walking I’ll type or use a voice memo. My desk has a stack of notepads, 3×5 cards, and post-its. I have a friend that keeps markers in the shower to write on the walls.

Wherever we have our inspiration, it’s important to have tools. Otherwise, we release ideas back into the wild to find another home.

Writing an idea down is a great step, but it won’t go anywhere if we don’t feel compelled to act. The closer to having an idea that we take action, the more likely it is that we will make it real.

Maybe there isn’t time right now. Then as soon as possible, we capture as many concepts and thoughts about the idea as we can. Maybe we determine what can be done now or delegated to move the idea forward.

If we have competing priorities, we may have to defer an idea. It’s still critical to capture whatever thoughts we can now, so that we can tap back into that energy later. Otherwise, it’s more likely that the idea will end up in the delete pile.

Some ideas have an expiration date. We also have finite energy and have to prioritize where we put it. If our idea is looking for a home, it may find one elsewhere with someone ready and able to act now. If we think it’s that important, then we have the option to make time or get help to move it forward. 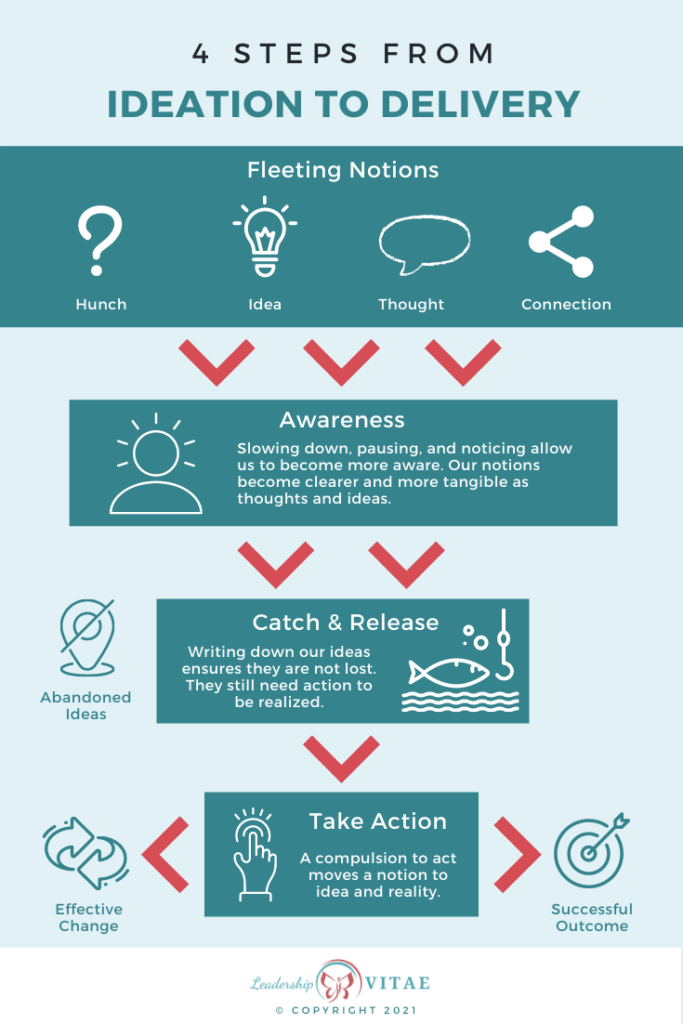 In the last few months, 2-3 new ideas surface each week and end up on 3×5 cards. They may contain a quote or potential title. Some are filled front and back with musings.

On quiet weekend mornings, the cards come out. I begin framing what inspires me most in that moment. The others get some creative attention for titling and imagery. Often, this inspires me to keep going down the writing path if I have the time.

I allow myself to fill the funnel and catch new ideas at any moment. I make time to take action on specific days and prioritize what I focus on first. That means some ideas end up in the delete pile eventually, if I never get to them or am no longer excited when the time comes.

Ironically, I made a huge mistake on this article. I was almost finished when my laptop suddenly rebooted. So frustrating! I could have put it aside, but I knew the same words that were flowing just moments ago would be lost.

The article could very well have become a delete. Instead, I started over and maybe ended up with something better. If the idea was going to land, I wanted it to land with me.

We don’t have to be a creative to receive new ideas and inspiration for our lives and work. We all have the opportunity to follow the four steps from ideation to execution: