Millions of People Quit Their Jobs in the ‘Great Resignation’. Here Is Why It May Not Last Long 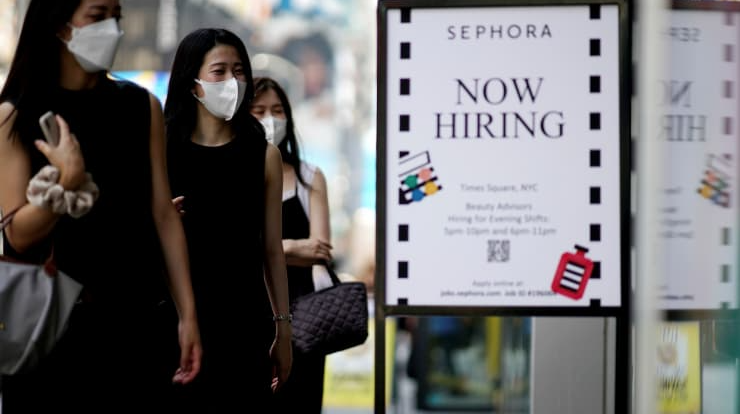 Reports of the so-called Great Resignation may have been exaggerated.

Over the past several months, a rapidly growing number of Americans left their jobs — more than 4.4 million in September, the most recent month for which data is available.

During that time, much of the narrative has focused on burned-out employees stomping out of their jobs — the “Big Quit” as some of have put it, in which workers are demanding higher wages, better working conditions, and more mobility.

While worker dissatisfaction is an obvious factor behind quits whenever they occur, there has been increased focus lately on how employers can find incentives to keep workers from leaving.

However, the issue has been complicated and likely clouded by the pandemic.

Economists at Barclays have a different theory. They say the trend is less about resignation than it is about hesitation — worries over COVID-related factors that likely will subside in the days ahead.

Many still out of the workforce

Though the pace of hires has cooled off a bit from the summer, it is moving at a level that easily would have been a record prior to the pandemic. At the same time, the rate of layoffs has remained consistent for most of this year, reflected in weekly jobless claims that have been in a range recently and approaching where they were before the pandemic hit.

It all adds up to a jobs market in which people leaving their positions is driven more by temporary COVID concerns than a general strike, as some have suggested.

“We believe that this resignation dynamic is mostly a symptom of other underlying forces that are affecting labor market participation, rather than a cause,” Barclays deputy chief U.S. economist Jonathan Millar and others wrote in a lengthy analysis.

“Indeed, the high quit rate is a red herring for understanding the sluggish return of workers to the US labor market following the COVID-19 pandemic, in our view,” Millar wrote. “Instead, the true cause is a hesitation of workers to return to the labor force, due to influences tied to the pandemic such as infection risks, infection-related illness, and a lack of affordable childcare.” 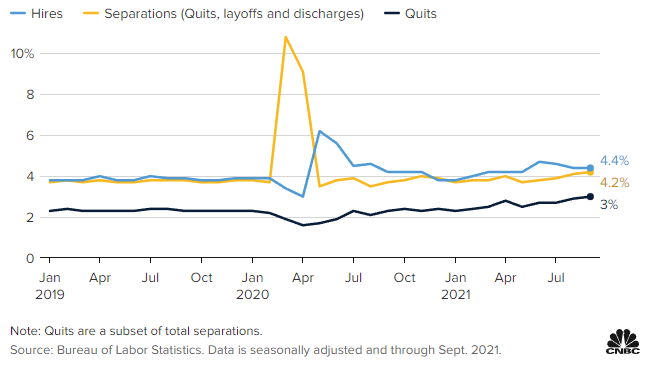 That paints quite a different picture, then, of a Great Resignation in which disgruntled workers are simply leaving jobs in droves.

Still, the issue of a declining workforce is important to understand, and it is vexing policymakers at the Federal Reserve and elsewhere.

The labor force participation rate, a measure of those working or seeking work against the total population of working age, is 61.6%, 1.7 percentage points below its pre-pandemic level. That represents a decline of just under 3 million since February 2020.

Fed officials have said they won’t start raising interest rates until the labor market gets near its pre-pandemic levels, and seeing a normalization of the participation rate would be part of that equation. The size of the labor force is about 1.4 million larger than at the beginning of 2021 but still not where policymakers would like.

Citing Labor Department and other data, Barclays said the decline in labor force participation is being fed almost exclusively by married people living with a spouse who left the labor force in the late summer of 2020 and did not return.

“This general profile itself gives us reason to believe that many of the missing workers will gradually transition back to work,” the firm said. “This is supported by survey evidence from other sources suggesting that COVID-related considerations — such as infection risks, illnesses, and pandemic income supports — remain important contributors to ongoing participation hesitancy.”

Where the quits are

About half of all quits this year have come from leisure and hospitality, an industry under intense pressure from the virus and the associated restrictions and fears that have limited dining and drinking out.

However, about a fifth of those quits also have come from professional and business services, according to DataTrek Research. With many of these moves coming from upper levels, including CEOs, the trend “is likely a positive sign for the labor market,” DataTrek co-founder Jessica Rabe wrote in a recent report.

“The quits rate is traditionally a measure of economic confidence, as workers typically voluntarily leave their current roles after accepting a better offer,” Rabe added. “The churn in this industry along with the overall high level of quits puts upward pressure on wages, helpful from a consumer spending standpoint amid strong inflationary headwinds.”

Indeed, wages have been in a sharp upswing lately, rising 4.9% year over year in October. That’s seen as growing evidence of an empowered workforce able to fetch higher pay.

However, there could be a dark side, as the difficulty in finding workers might force business owners to turn more to automation and lock people out of those jobs.

That’s another reason the dynamics underlying the Great Resignation, such as it is, could change quickly.

“With this backdrop, we expect continued growth in automating roles both to take the place of workers companies cannot find and to offset rising wage pressures,” Rabe wrote. “This will be an important trend to watch as it will shape labor markets over the long-term given that automation, once installed, is simply never reversed.”