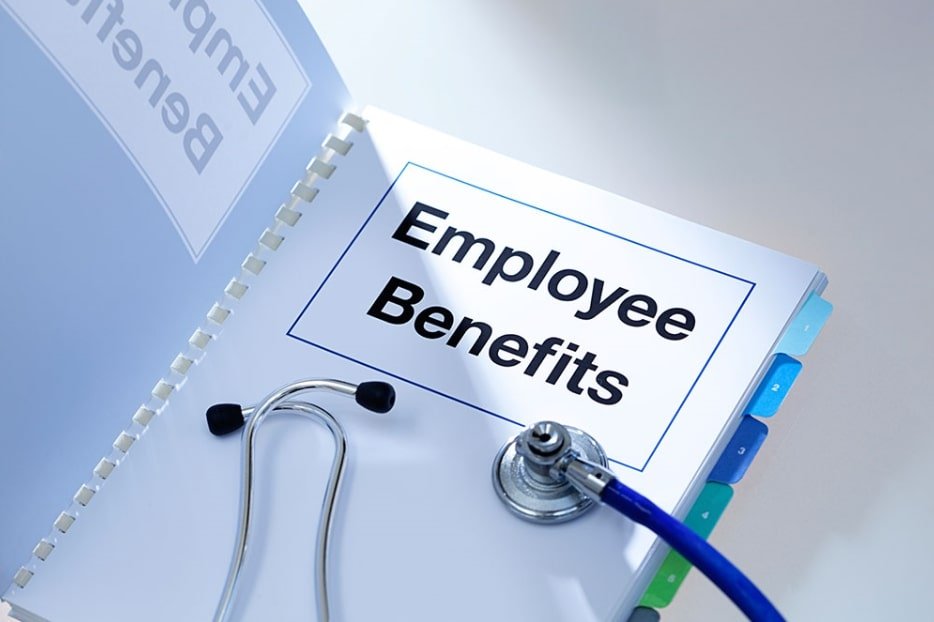 The two-site company, which includes fine dining Boucherie and the Bourrée at Boucherie smokehouse carryout, is an example of the lengths small companies are going to with the current labor shortage.

“Since the Great Resignation, we’ve really just been trying anything,” business manager Jack Fredericks said. The company began to experience a labor shortage in 2021.

Boucherie isn’t alone. It’s all part of the arms race to attract and retain workers at a time when demand is surging and invigorated labor movements are clamoring for better pay and working conditions.

Small companies have long struggled to pay for expensive health benefits. As health-care costs have risen—outpacing inflation—the percentage of workers covered in firms with 3 to 199 employees has dropped from 71% in 2001 to 60%, according to Kaiser Family Foundation’s 2021 Employer Health Benefits Survey.

Boucherie started offering a UnitedHealthcare plan in the fall to its senior managers, such as general managers and kitchen staff, and employees who work at least 30 hours, Fredericks said. Six employees are on the plan.

“What we were experiencing is when we were having normal amount of turnover, we couldn’t find anyone,” Fredericks said. “Nobody was answering job ads.”

The company raised its base hourly wages by about 30% recently in addition to offering health insurance. The insurance is “definitely something that has helped,” Fredericks said. “It’s the first thing we lead with right now.” 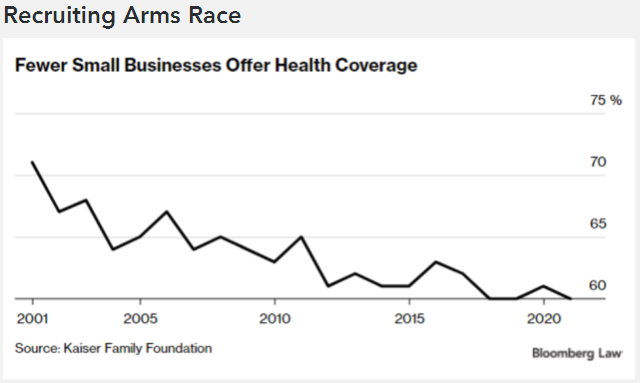 “Over the last few months I’ve certainly seen more small restaurants coming in asking about what they can do with their health benefits,” Wolf said.

Lower-wage workers, Black Americans, Asian-Americans, and people in industries such as restaurants are “much more likely to think about resigning than others,” Melissa Swift, leader of professional services firm Mercer’s transformation practice for the U.S. and Canada, said. “When we looked at why people would stay or go, No. 1 is still pay and benefits.”

Hourly wages are increasing, Tracy Watts, senior partner and national leader for U.S. health policy at Mercer, said. For low-wage workers, “All of a sudden you have a lot of job choices at the same hourly wage,” she said. Adding health benefits makes it an easier decision for workers when deciding on job offers.

Nebraska Furniture Mart, which has four locations in the Midwest and Texas, spent $11 million in pay hikes in addition to annual merit increases, but that’s not enough to keep workers on.

The Omaha-based company, which spent nearly $34 million in 2021 to cover about 5,500 members on its health plans, will be offering a high-deductible health plan to employees for free in 2022, and it’s debating offering it to families at no cost as well. It will also offer eligible employees health benefits in 60 days rather than 90 starting this year.

Beyond wages, health insurance is a signal that employers will invest in their workforce, Jack Hooper, co-founder and CEO of Take Command in Dallas, said. Take Command administers health reimbursement accounts, which allow employers to fund their own individual health plans that comply with the Affordable Care Act.

“Benefits makes it feel like you care as an employer, and that’s what creates that sticky retention that they want,” he said.

Boucherie pays about $140 a month for individual employee plans, while employees pay about $150 a month, Fredericks said. The restaurant has raised prices, but a 30% hike would have been too steep for customers. To cope with increased costs, it is focusing on expanding its business providing school lunches to private schools, he said.

Hooper, has seen “a big uptick in employers offering coverage that have never offered it before,” when business started picking up after the initial pandemic shutdown in the spring of 2020.

Previously 60% of their customers were new to benefits. Now 80% are. In November, Take Command added about 3,000 business customers that had fewer than 50 full-time employees—which don’t have to provide benefits under the Affordable Care Act—double what it had before the pandemic.

Many small employers are covering their employees by using individual coverage health reimbursement arrangements (ICHRAs), Hooper said. Employers can provide reimbursements for premiums and out-of-pockets costs through ICHRAs for employees enrolled in individual health insurance coverage that meets ACA requirements, such as plans bought through the Obamacare marketplaces.

“There’s still a labor shortage, and so a lot of people are offering health insurance,” Fredericks said. “It’s a combination of raising wages and providing health insurance. We had to do both in order to make this a place that’s desirable to work at.”