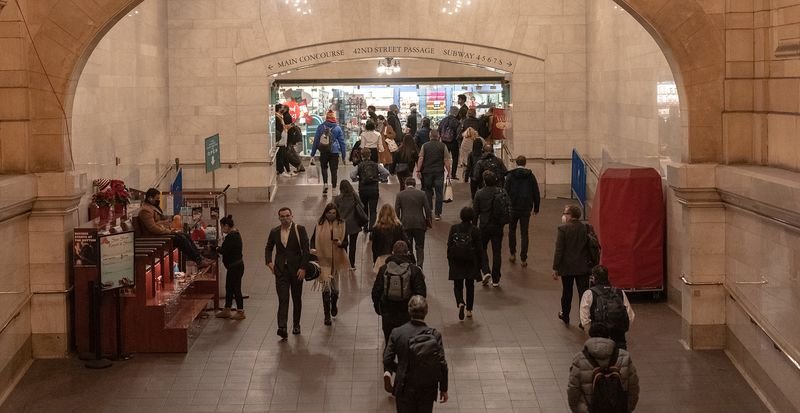 U.S. employment costs rose at a robust pace for a second straight quarter, wrapping up the strongest year of labor inflation in two decades as businesses competed for a limited supply of workers.

The employment cost index, a broad gauge of wages and benefits, advanced 1% in the fourth quarter, according to Labor Department figures released Friday. That followed a 1.3% advance seen in the third quarter, which was the strongest quarterly increase in comparable data back to 2001.

Compared with a year earlier, the ECI jumped 4%, the most in two decades. 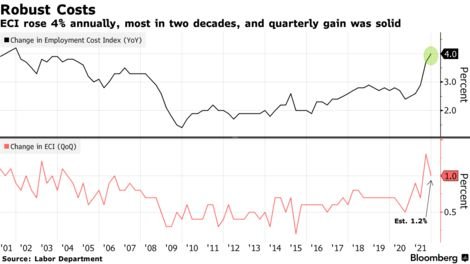 Compensation gains last quarter were broad-based across industries. Wages and salaries for civilian workers climbed 4.5% from a year earlier, the most in comparable data back to 2001.

The back-to-back quarterly advances underscore how a tight labor market has pressed businesses to bid up wages to attract and retain employees. In some cases that’s led to leaner profits, but many companies have passed along those costs to consumers through price increases.

Popular paint maker Sherwin-Williams Co. is raising prices by 12% next week to offset higher costs. That’s in part because labor costs are accelerating faster than in prior years, with some workers seeing their wages rise by double digits, according to the company. Meanwhile, McDonald’s Corp. said higher labor and commodity costs “more than offset” sales growth for company-owned stores in the U.S. last quarter.

Excluding government, private wages rose 1.2% from the prior quarter and a robust 5% from a year earlier. Though the quarterly gain was smaller than the prior period, it reflected a slowdown in incentive pay in the financial sector, according to Omair Sharif, founder of Inflation Insights LLC.

Unlike the earnings measures in the monthly jobs report, the ECI is not distorted by employment shifts among occupations or industries. Because of that, the third-quarter surge caught the attention of many. Fed Chair Jerome Powell cited the measure in December as a key reason for the central bank’s pivot to a more aggressive stance on inflation.

That’s in part because of concerns about a wage-price spiral, a term used to describe a self-feeding loop in which workers ask for higher wages to help offset inflation’s impact on their purchasing power. To help offset costs, businesses then raise prices further, fueling the cycle. But it takes time for such an inflationary spiral – last seen in the 1970s – to take hold. Rising productivity also helps to absorb those inflationary pressures.

A separate report out Friday showed inflation-adjusted personal spending fell 1% last month, the most since February, as a closely watched gauge of core prices rose a larger-than-forecast 4.9%. That was the biggest annual advance since 1983.

A host of factors including transportation bottlenecks, capacity constraints and stimulus-fueled demand for goods has driven up inflation to a near 40-year high. But rapid wage gains — if sustained — risk keeping inflation elevated for longer. Powell said Wednesday that the central bank is ready to increase interest rates in March to fight the rapid price increases.

How Companies See It

“Driver wages are up significantly pretty much in every division… Our cost per hire is up. We’ve seen higher sign on bonuses and the market is very, very difficult with the drivers being out there facing Covid.” — Nick Hobbs, COO of JB Hunt Transport Services Inc. on Jan. 18

“In addition to the historically high level of commodity raw material prices, we’re also experiencing rising cost in other areas such as labor and utilities. We expect to continue to proactively work with our customers to implement additional selling price increases in the first quarter.” — Michael McGarry, CEO of PPG Industries Inc. on Jan. 21

“We expect all commodity categories to be meaningfully elevated. We expect other costs including wages and transportation to be up in the mid-to-high single-digit range. We are currently implementing additional price increases in all businesses and will continue to do so as necessary.” — John Morikis, CEO of Sherwin-Williams Co. on Jan. 27